Skip to Content Jump to Main Navigation Skip to Search

Chair and Institute of Urban and Transport Planning

Whitsun Excursion of the Traffic Chairs (ISB, ISAC, VIA) of RWTH Aachen University

For the 2016 Whitsun excursion, the Traffic Chairs ISB, ISAC, and VIA of RWTH Aachen University gave 30 students an insight into transportation projects in and out of Germany. The students travelled to Copenhagen, stopping at the A7 and spending the night in Lübeck, and then took a day trip to the neighbouring Swedish city of Malmö. 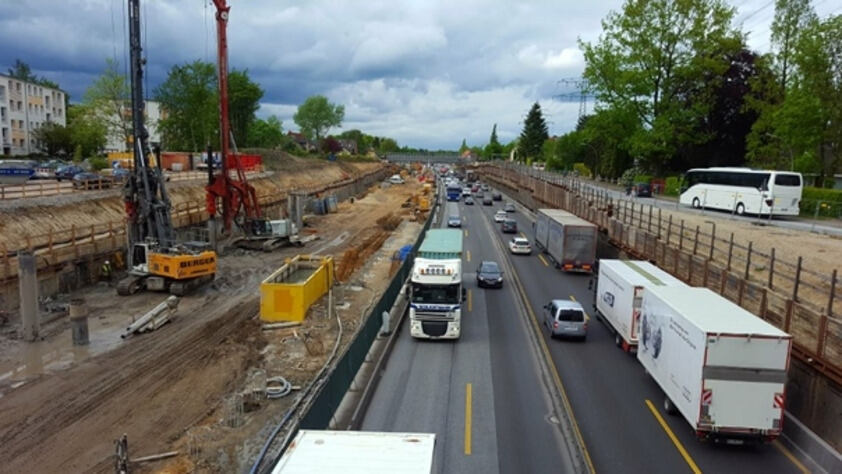 Copyright: © Qualmann Photo 1: Construction site of the noise cover of the A7 in Schnelsen

Our excursion began in the early hours of the morning, shortly before 6 A.M., at the well-known Sammelbau building on Mies-van-der-Rohe-Straße. After a long drive and a number of mandatory breaks, the programme of the excursion began: The first item on the agenda was the expansion of the federal highway A7 around Hamburg. After a quick meal, the VIA Solutions Nord GmbH & Co. KG invited us into their planning office in Quickborn to give us an overview of the projects, its frame conditions, and its individual aspects in terms of planning, construction, operation, and funding. This 65-km stretch of the highway is extremely busy and is being expanded to six or eight lanes north of Hamburg. In addition, noise control measures are being implemented, including noise barriers, porous asphalt, and a noise cover in Schnelsen. What makes this project special is that it is a PPP project (Public Private Partnership) in the shape of an accessibility model. The expansion began in late 2014 and is expected to conclude in December 2018. It is divided into eight construction sections which will be worked on in different phases in order to inconvenience drivers as little as possible. We were excited to visit a concrete mixing plant next, which was built specifically for the construction project, as well as a finished concrete road surface and the construction site of the noise cover in Schnelsen that will protect residents from traffic noise over a stretch of 550 metres.

Following these visits, we continued on through the City of Hamburg towards our next destination, a youth hostel in Lübeck. After the check-in we had the opportunity to take a very informative, short walk through the historic centre of Lübeck guided by Professor Vallée. We concluded the first evening of our excursion in an informal gathering with refreshments in a bar in the heart of Lübeck.

The second day of the excursion was dominated by the trip from Lübeck to Copenhagen including a ferry crossing at Puttgarden. Once we’d reached the Danish mainland, the next item on our agenda was up: the visit of the information centre of the Fehmarn Belt Crossing in Rødbyhavn. 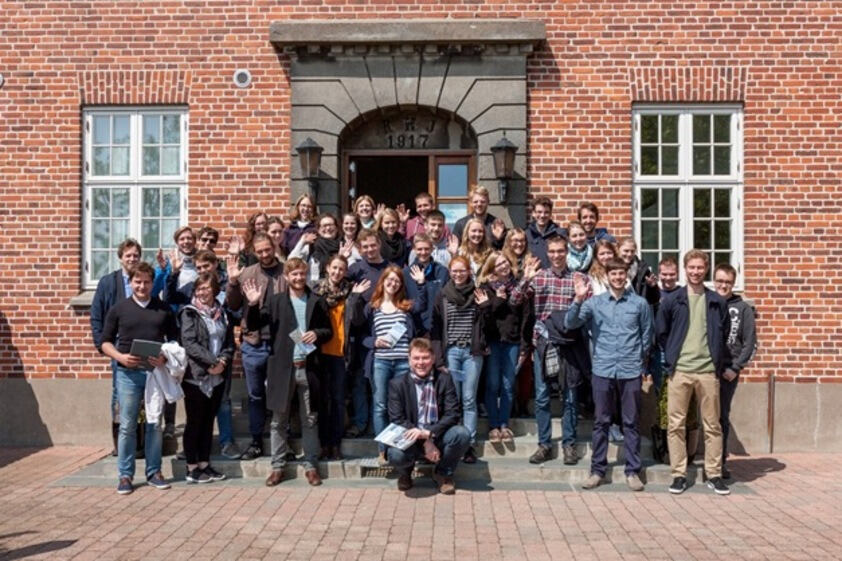 The goal of this project is to replace the 45-minute ferry crossing that we had just used with an 18-km tunnel for both cars and trains. This would reduce the travel time to approximately 10 minutes, giving the region new perspectives. For better visualization, we visited an observation platform overlooking the future construction site with its planned tunnel portal site and factory for immersed tunnel segments.

Photo 3: Tightly scheduled ferries on the busy straight-line route between Germany and Denmark

After the subsequent journey to the Danish capital Copenhagen and checking into a youth hostel at the southern edge of the city, we took a short break and then returned to our programme: We were introduced to the project “Supercykelstier”, a projected network of high-quality and specially signposted bike lanes. The goal is to establish a new brand that will motivate commuters to use their bikes for longer trips, too. At the moment most people use their car for distances longer than five kilometres; for a better traffic flow and higher quality of life, this share should be reduced. The first two sections of this “bicycle highway” have already been built by closing gaps and improving the infrastructure. To create a continuous network, all of the involved municipalities of Copenhagen must work together.

We used the driverless metro, another item on our agenda later on, to travel to our final destination for the day, the airport of Copenhagen. Over sandwiches and drinks, we were given an overview of the development of the most important airport in the Öresund Region and Scandinavia. The airport has seen a lot of development since it opened in 1925, especially in recent years. The current objective is to increase its capacity in the existing area, and we were introduced to several concepts that aim for a clear, compact, and efficient airport. We were impressed by the view from the internal roof deck, from which we were shown the airport with its three runways and its terminals. Finally, some employees of the airport showed us the current developments in the security zone and, as a concrete example, the expansion of the manoeuvring area for the Airbus A380, focusing on the way from a vision of the airport via the planning of concrete projects to the challenges of implementing these while keeping the airport in operation.

The remainder of the evening was free time, which thanks to the good weather many of us used for some relaxed, individual sightseeing and various refreshments.

Around 8.30 in the morning we started our “Rail Thursday”, for which four different rail-bound stops were scheduled.

The programme began with an introduction of the Banedanmark in the Copenhagen traffic tower, where the entire operational management of the metropolitan area of Copenhagen will be pooled in the future. The Banedanmark representatives explained how they had just begun making the switch of the train protection system and control technology to ERTMS/ETCS L2, which is a prerequisite for centralising the operational management. In addition, there are numerous new building and expansion projects with a total budget of 24-28 billion DKK which are aimed at realizing a nationwide one-hour model: The goal is to reduce the travel time between the four largest cities in Denmark to one hour. To improve customer service, a new algorithm is being implemented. The algorithm calculates a schedule in real time for the next fifteen minutes that is adapted to the current traffic situation, making possible a precise control of railway operations. To improve our understanding of the communication chains of all involved (both humans and technology), all of us participated in a role-play.

For the second stop of our Thursday programme, we visited the Banedanmark signalling control at Copenhagen Central Station. This is where the switches and signals in Copenhagen, the Öresund region, and the wider surroundings are operated with a combination of electric and push-button control. Our third station was the S-tog operations control centre, which is responsible for the entire Copenhagen S-train network. There, too, we got to look behind the scenes.

After a brief individual lunch break, we travelled to the fourth station: the workshop of the driverless metro and the attached control centre. The tour of the workshop was particularly interesting, giving us extraordinary insights into the maintenance process and the technology of the vehicles. 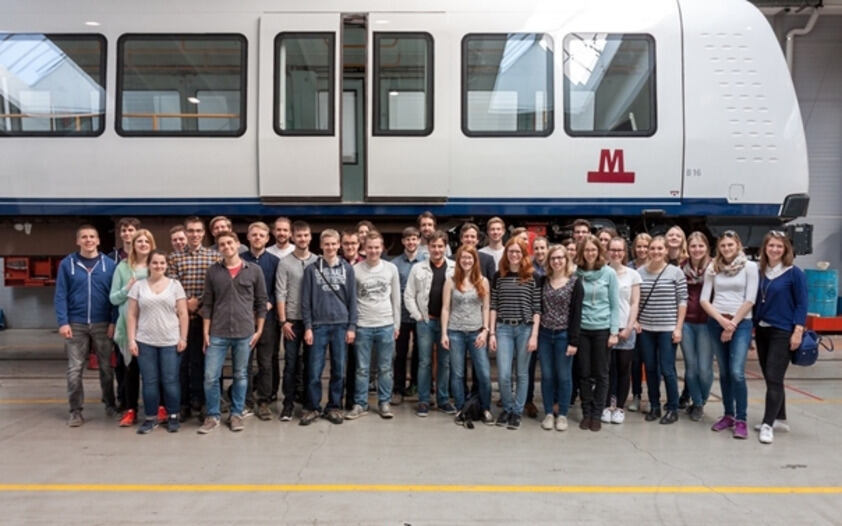 Copyright: © Wink Photo 4: Group photo in the workshop of the Copenhagen Metro

This concluded “Rail Thursday”, but not yet our programme for the day: The last item on the agenda was a visit of the autonomous neighbourhood Christiania, from where we took a relaxed walk through the centre of Copenhagen to a small Italian restaurant, concluding our day with pizza, pasta, and tiramisu.

Day 4 of our excursion began with breakfast at 7.50 A.M. since we were planning to take the bus at 9.00. However, a short-term cancellation made us reschedule and leave for Malmö, Sweden, via the Öresund Crossing earlier than planned. The 16-km crossing is a combination of a bridge and tunnel and famous for leading across an artificial island for several kilometres. Crossing by bus gave us an imposing view of the Öresund Bridge, which is the longest cable-stayed railway and motorway bridge in the world. Before the opening of this fixed connection on 1 July 2000, a ferry service was in operation but had nowhere near the same capacity as the bridge, recording much fewer crossings than today’s connection. Once we had arrived in the third-largest city in Sweden, we had almost three hours of free time for our own individual use. Most of us chose to explore the city in small groups. Malmö boasts several market places, numerous beautiful parks, and a castle, the Malmöhus slott. The castle was built in the 16th century and today serves as a museum. In addition, Malmö has a beautiful old town with many shops and a multicultural food scene.

Late around noon we met for our official programme at the stadshuset (town hall). Over coffee and kanebullar (cinnamon rolls) we listened to a presentation by the city, which in addition to a general overview provided us with information on the public transport network, the plans for the tram, and the bicycle transport system, which had celebrated the launch of a bike rental system just five days before. The focus of the next part of our stop was the neighbourhood of Västra Hamnen (Western Harbour). An employee of the City of Malmö led us into this very green district and gave us a tour. The bicycle transport system is particularly valued here, as is the reduction of the number of cars. Among other measures, so-called “shared spaces” are being introduced to achieve the latter. One of the most popular parts of Västra Hamnen is the sea-front promenade, inviting visitors and residents for walks and (weather permitting) swimming at the piers constructed for this purpose. The tour ended at one of Malmö’s landmarks: The Turning Torso, the tallest tower in Scandinavia at 190.4 metres.

This station concluded the official programme of our excursion and we began our journey back to Copenhagen. However, we made a surprise stop before we left Sweden – at IKEA, to have a typical hotdog.

Saturday began in a more relaxed fashion than the other days since there were no morning appointments except for the checkout. Once everything had been packed and loaded into the bus, we had all of Saturday at our disposal until our departure in the late afternoon. Everyone used the free time differently: Some rented bikes and explored Copenhagen the Danish way, others walked through the city and yet others opted for public transport. Regardless of our individual programmes, we all enjoyed the free time and the beautiful weather in Copenhagen, giving our excursion a satisfying conclusion before we took the night bus back to Aachen.